The Making of a Corn Tortilla Snob

I admit it; I’m what some have referred to as a Tortilla Snob. Yes, there are wine-snobs, car snobs and even coffee snobs, which are all terms given to someone who only tolerates the finest of the fine. This makes sense when it comes to wine, cars and even coffee, but the lowly tortilla? Yep, it’s true. I can’t stand cheap flavorless tortillas made in massive factories, which, unfortunately, is just about all you’ll find in your local grocery store. So, let’s talk a little about this not-so-secret love of mine, the corn tortilla.

Origin of the Word Tortilla

The word ‘tortilla’ comes from the Spanish word “torta” which is loosely translated as bread or cake. When you add an “-illa” to a word it means small or little. So, a torta-illa is a small or little bread, which could also be called a flat bread. There you go, you already know more about tortilla’s than most people in America.

The actual history of tortillas pre-dates all of the Euro-centric histories and was a staple item of the Aztecs. Originally made out of a corn flour called maize, it wasn’t until the Spanish came to Central America that the idea of using wheat flour was introduced. 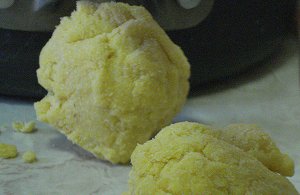 The corn four used in a corn tortillas is made out of maize or a masa dough, which is simply corn kernels soaked in a very alkaline solution made with water and lime (the mineral, not the fruit). This is called nixtamalization. Doing this converts the bioavailability of the nutrients in the corn and also makes it much easier to digest.

When the corn is soaked, it puffs up and the outer husks of the kernels come off and are discarded. This puffed up corn is then ground using a ‘mortar and pestle’ until it makes a paste or dough. This is still the method used to make corn tortillas today and for a snob like me, that’s the way I like it. Modern factories have ditched the mortar and pestle in favor or more efficient tools but I think it looses a bit of the romance of the process. 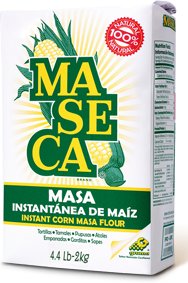 Today you’ll find dry maize flour available in bags just like wheat flour, in most Latin markets or even in the Latin food section in your major grocery stores. If you’re extremely fortunate, you’ll find bags of the fresh maize dough in the refrigerated section but that’s more likely in area’s closer to Mexico. This flour can be used for making tortillas as well as tamales.

Some have actually concluded that real maize dough could fit into a Paleo diet without much trouble, assuming you’ve soaked the corn properly. Of course, the puritans of the diet would say otherwise, but, it’s a lot better than the wheat flour and I don’t really mind “cheating” with corn tortillas every once-in-a-while.

Variations on the Tortilla

Most Americans are familiar with the traditional Mexican corn tortillas, which are thin, and round, about 4-6 inches in diameter, perfect for picking up with one hand. 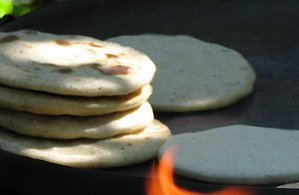 When I travelled to El Salvador, I was thrilled to see much thicker tortillas, almost always made by hand. They’re about 2-3 times thicker than the typical Mexican tortillas, very similar to pita bread. This is also very common in Honduras, and Guatemala.

When you stand in your local grocery store looking at shelves full or tortillas, other than size and corn versus flour, the only variation you’ll see are whether you want white or yellow corn. It’s not uncommon to find blue corn tortillas in Mexico, but unfortunately, in North America, these are almost always made into chips (at a higher price than white or yellow corn, for some odd reason). 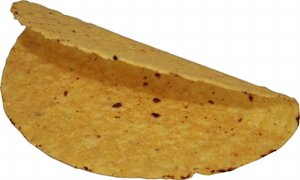 The Worst Form of Tortilla

The standard corn tortilla is typically used to make tacos, here in America. It pains me to say, most people will buy and use the pre-formed taco shells, like you find at Taco Bell. You’ve probably used them yourself because it’s incredibly convenient; in fact, they’re used in a lot of Mexican restaurants as well. Being a tortilla-snob this is one of my tests for the authenticity of a Mexican restaurant (the refried beans are the other). If they use pre-formed shells, it’s probably not very authentic and I’m probably going to stay away.

The next time you decide to enjoy a taco night at home, walk right past that box of pre-formed tortillas and pick up a bag of fresh corn tortillas to fry up yourself. It’s incredibly easy and the difference in taste and texture will probably come with rave reviews. I’m putting together some information about how to properly fry tortillas for different uses. Once it’s done, give it a try and see. If you REALLY want to knock their socks off, start with homemade corn tortillas and then fry them as you would normally. 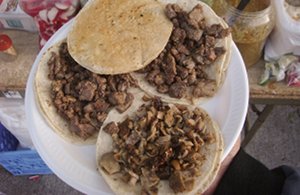 If you’re a little freaked out about FRYING tortillas and you’re trying to cut the fat in your diet, consider serving up soft corn tortillas as an option for everyone. This is a very common way to serve tacos in Mexico. In fact, if you can find (or make) the smaller 2-3 inch tortillas, you can make up some delicious “street tacos.”

If you do want to try out soft corn tortillas, I strongly suggest you make fresh homemade tortillas or buy the thicker tortillas available from the wonderful people at Tortillaland in San Diego. They’ll ship them to you and they are far superior to anything you can buy in a local store (unless you’re in Southern California).

That should bring you up to speed on the world of corn tortillas. I’ll tackle the finer points about flour tortillas in another article. In the meantime, here are some of my favorite things to make with my corn tortillas:

These are either soft steamed or crispy fried corn tortillas, folded in half, filled, most of the time, with a meat such as beef, chicken, pork, or my favorite, fish. If you want to get adventurous, try some of the best tacos ever filled with beef tongue, cheeks, or tripas (small intestines). I’ve tried them all and they’re delicious. I’ve still not talked myself into trying beef brain tacos, but some rave about them. I’ll have to take their word for it.

Growing up in San Diego, this was a staple in my diet. Back in the 80’s you could get 6 rolled tacos covered in guacamole and cheese for under $2. Dip those in a small cup of hot sauce and I was in heaven. These are very easy to make, in fact, if you make them at home, you can really do them up well with plenty of stuffing. Most taco shops in Southern California serve them with just a sliver of shredded beef in the middle. Don’t get me wrong, they’re delicious, but there’s a reason they’re so cheap.

This is the one exception for me when it comes to the thinner tortillas; I actually like them best for tostadas. Fried flat and crispy, you spread some refried beans on them, top with your favorite meat filling, or just beans, and then top with cheese and shredded lettuce. Pour some hot sauce on and you’re eating a fabulous tostada. In the early days of our family, tostados were a very common meal on the day or two before payday. You can feed a whole family for under $3. No, seriously, you can.

Ceviche tostadas are a refreshing and light change on the tostada I mentioned above. It’s basically just the crispy flat tortilla, topped with ceviche and some hot sauce. Ceviche is a seafood medley “cooked” in lemon and/or lime juice. The acid in the juice will actually cook the meat.

These are a great potluck dish or even a flavorful way to do up a quick dinner, if you want a change from your regular tacos. Corn tortillas are quickly drenched in hot oil to soften them up (you don’t want them crispy), filled with either shredded chicken, beef or just cheese then rolled up and smothered with a red chile sauce. Sprinkle some cheese on top and you’ve got a great dish. Usually the chicken tacos are served with a green tomatillo sauce instead of the red chile and then a dollop of sour cream.

In most Mexican restaurants, each tortilla is prepared and rolled up by itself, placed on a plate with one or more enchiladas and then covered in sauce. When we make them for a potluck we put them all in a glass tray, pour the enchilada sauce on top, sprinkle with plenty of cheddar cheese and then bake them in the oven for 15-20 minutes.

If you want to try something extra special and unique, replace the red or green enchilada sauce with “mole sauce.” This is a dark sauce made with chocolate (it’s not sweet), chilies, nuts and other spices. It has a unique flavor that I love, but some can do without.

Of course, you can always cut your tortillas up and fry them in some oil to make your own homemade tortilla chips. Doing these yourself will always taste a lot better than the bags of chips you buy at the store, but it will take an investment of time. Once you pull them out of the oil, sprinkle with some salt and serve with your favorite salsa. If you want to spruce these up even more, sprinkle some shredded cheese on them while their still warm and let it all melt into a gooey goodness.

This is a great breakfast dish that’s traditionally made with stale tortillas from the night before. Of course, you don’t have to use stale tortillas; it’s just a nice way to not waste food. Tear or cut up your old tortillas and fry them in some oil or lard until they’re semi-crispy. You then toss them with some red chile or enchilada sauce and top them with a fried egg. But, don’t stop with an egg, you can make chilaquiles with chicken or beef as well, quickly and easily turning it into a great lunch or dinner.

Well, there you have it, everything you need to know about the corn tortilla. I hope you’ll try making your own sometime so you can join me in your refusal to eat those tasteless thin things they sell in the grocery stores.

Do you have a favorite recipe made with tortillas? Do you have a special recipe for a great taco or enchilada filling? Please share it in the comments below so others can enjoy.

As always, if you have any questions or need something clarified, please comment and I’ll make sure I do whatever I can to help you out.