Go directly to the recipe

Buffalo chicken wings are something you’ll see at a lot of parties, potlucks, bars, restaurants and especially at a gathering to watch the Super Bowl.  In fact, in an informal survey I did on the Chef Pablo Facebook Page, it was voted the number one item people were planning on having at their upcoming Super Bowl party.  They’re cut up chicken wings, crispy on the outside, moist and juicy on the inside and coated in a buttery hot sauce mixture.  Dunk those into a bit of blue cheese (or Ranch) dressing and wash it down with an ice cold beer.  Ahhhhhh… But what’s the secret to making the real deal, you know, the original Buffalo chicken wings from Buffalo New York?  Well, after a great deal of research, I’m happy to say, you can do this one without much effort.  Afterall, they were created in a bar, in Buffalo New York.  This is no fancy-schmancy culinary delicacy  But it is something you’re going to love to make for family and friends. 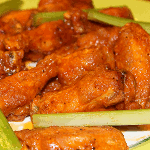 “Oh my gosh! These are the greatest chicken wings I’ve ever had! Everyone is going to love this recipe babe. It’s going to be your most popular one!” – My Wife

There are a number of different stories on the origin of the Buffalo Chicken Wings Recipe, but the one that seems most reputable comes from The Anchor Bar and the owners Teressa and Frank Bellissimo. It was a late Friday night in 1964 and a number of people came into the bar, all college friends of their son Dominic. They were hungry and they wanted something different.  All they had left that was even close to being ready in the kitchen were some chicken wings they intended to use to make some stock for other recipes.  With a little creativity and ingenuity, the Bellissimo’s cooked up some wing in the deep fryer and slathered them in some hot sauce and butter.  They were a bit spicy so they offered up something that would help cut the sting, a bit of blue cheese dressing.  The combination was a hit and became a regular request.  Word spread and soon, the eventually world-famous Buffalo Chicken Wing was on the menu.

Again, it’s hard to say whether this is the absolute truth, but it’s as close as anyone is willing to get.  Here’s “The Real Story” as posted in the Anchor Bar in Buffalo.  As you can see, this is the story the Bellissimo’s are running with and it works.  After-all, we don’t eat these amazing wings because they have a interesting story behind them, we do it because they’re delicious!

There are a number of things people argue about, in regard to Buffalo Chicken Wings, other than the origin of them.  One of them is whether you should use butter or margarine in the sauce.  I’m a huge fan of using natural products as often as possible.  I think man has done more harm then good in trying to conjure up “healthier” versions of the very things nature provides us. But, in doing my research on the original Buffalo Chicken Wings recipe, I realized most believed the Bellissimo’s used margarine and not butter in preparing the sauce.  Many cited the way margarine looks when it cools, compared to butter. I don’t know if I see that difference, but I can say this, in 1964, the American use of Margarine was really ramping up and it was a very popular item in the kitchen.  Many thought, because it’s made from vegetable oil instead of animal fat, it’s healthier for you.  For that reason alone, I would be willing to guess, a bar in Buffalo New York probably used margarine in most of it’s recipes in 1964.

A lot of restaurants, looking to offer up the distingtive crispy exterior will first coat their chicken wings lightly with some flour. Doing this, will obviously put a bit of a crunchy “skin” on the skin.  But, most people seem to agree, the Buffalo Chicken Wings at the Anchor Bar were fried completely naked.  There really is no reason to put a flour coating on them if you cook them at the right tempurature. They will come out of the fryer nice and crispy, ready to be tossed in the buttery (or ‘margeriney’) hot sauce mixture.

Fry your chicken wings! Please don’t try to duplicate the original recipe with baked wings.  Can you reduce some of the fat content by doing this?  Of course, but if you’re going to be eating chicken wings, just do them right and indulge in the deep fried goodness.  This isn’t something you should be eating every weekend anyway, so make it a cheat-meal and enjoy the real deal.

Only use Franks Original Hot Sauce. There’s no debate on this one and I’ve only seen a handful of people even suggest an alternative.  Frank’s has a unique flavor and texture which blends well with the margarine. So, even if you have to order it through Amazon, get the real Frank’s Original Hot Sauce. Oh and don’t use the Franks Wing Sauce, it’s NOT the same!

In doing my experiments with this recipe, there are a few things I noticed that could make the difference between good and great Buffalo Chicken Wings.  First of all, use fresh chicken.  Don’t buy the individually frozen chicken wings and expect them to turn out just as good. I hope it goes without saying, but cut off tips of the wings and toss them, or put them in a pot and make some broth. Also, make sure you’ve patted the chicken completely dry after washing each wing.  I dried mine and then as I layered them in the bowl, I sprinkled each layer with some salt and freshly ground black pepper.  You can go fairly liberally on the pepper, but don’t go crazy with the salt, just a nice sprinkling like you would at the dinner table.  I really think this is one of the secrets to making these turn out fantastic.  Most people fry their wings without seasoning them first.

When prepare the sauce, let it simmer a bit on a low or low-medium heat to thicken it up some.  Make sure you stir it frequently as the sauce will separate a bit. I’m going to give you the recipe for a “medium” sauce below, which a one-to-one ration of margarine to hot sauce.  If you want to kick it up to a spicy level, just make it a three-to-one ration of hot sauce to margarine and the mild is just the inverse of this, three-to-one margarine to hot sauce.   In case you’re wondering how hot the mediums are, my daughters friend was over and she can never tolerate much spice in her food, but she loved the medium wings.  I did up some mild ones as well, but the medium was fine for her too.

When you drain the wings, after they come out of the fryer, place them in a single layer on a platter covered in paper towels. This allows them to drain properly without little pockets of oil cooling between the wings.

The very last tip, I think, is a very important one for getting your wings to turn out restaurant perfect.  Once you’ve coated them in the hot sauce mixture, place them on a cookie sheet and place them in a 400 degree oven for about 4 minutes.  I wouldn’t go much longer than this as it will dry out your otherwise, very juicy wings.  You just want to bake in the sauce so it’s not a slippery mess and I found 4 minutes was the perfect time for this.

Ok, so with all that information, it’s time for you to enjoy an incredibly simple but delicious Buffalo Chicken Wings recipe.  Don’t let the simplicity of it fool you into thinking it’s not the best you’re going to ever taste, as it will be.  Also, remember, this is something that was thrown together in a BAR late on a Friday night in Buffalo New York.  This isn’t a snooty cafe in Paris, preparing an elegant dinner for royalty. It’s a BAR… on a Friday night… in Buffalo New York.  I hope you enjoy them as much as my daughter and her friends did. 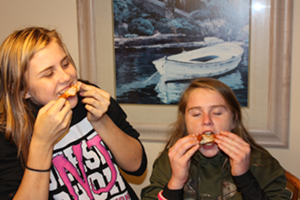 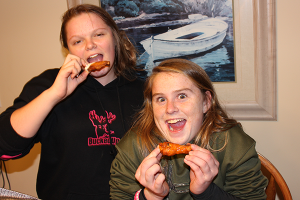 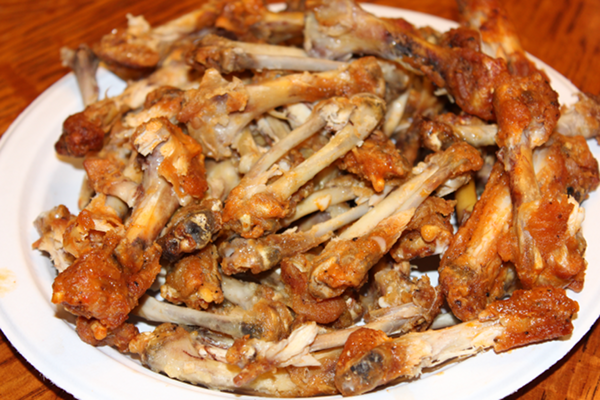 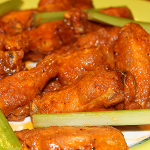